Ink & marrow was my first real attempt at short film. Shot as a stop motion in 2013, it was entered into Tropfest and out of 1,200 films was shortlisted to the top 100.

I got together with my friend Lindsay Owens to make the music for the film. We drank a lot of red wine and talked about how our jamming sessions would be the makings of our new band, the working title of which was ‘Gatitos Perdidos’ or The lost kitties. (We both own cats that we adopted off the street.) The band has yet to really take off. 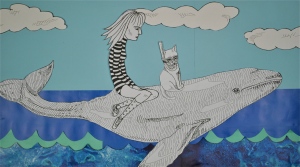 The production side of the film was only 1 day. One very long day of shooting everything, which was done in my DOP’s garage. We (Jess Johnson Pond, Annabel Jenkins and myself) set up a makeshift studio on the ground, with a few lights and a camera on a tripod. We had written out the schedule and shot list in great detail before hand, so were able to bang through shooting and ticking things off systematically. It was a long day, but great fun with the 3 of us girls and the soundtrack to The Little Mermaid playing in the background.

The central characters are a girl and her cat. They are rebels, outlaws; they do what they like and they don’t give a shit. Skateboarding, tagging, egging houses, drinking in public, scaring pigeons, smashing windows and getting into fights. Always on the run from the law.

After the action packed first segment we see our heroes in bed knackered after a big day. Cat sleeps soundly, while girl lies restless lo 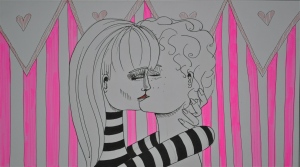 oking at the moon. Though her life is wild and packed with adventure, she is longing for something. she feels empty.

Ink & Marrow is about the search for that something missing, that empty hole in our hearts that keeps us longing.